Some people have an increased risk of particular types of cancer because they have an inherited gene fault.

How can genes cause cancer?

Inside almost every single cell in your body is a structure called the nucleus, which is the control centre of the cell. Inside the nucleus are 23 pairs of chromosomes made up of genes. Genes are coded messages that tell cells how to behave. They control how our bodies grow and develop. We each have about 25,000 genes.

All cancers develop because something has gone wrong with one or more of the genes in a cell. A change in a gene is called a ‘fault’ or ‘mutation’. Usually a cell must have 6 or more gene faults before it becomes cancerous. These faults can make a cell stop working properly. It may then become cancerous and divide and grow uncontrollably. Most gene changes happen during our lifetime but some can be inherited from a parent. Most cancers are caused by gene faults that develop during our lifetime. They may happen as we get older due to random mistakes when a cell is dividing. Or they may happen because of something we are exposed to, such as cigarette smoke or sunlight. These things are called carcinogens. These gene changes don’t affect all body cells. They are not inherited and can’t be passed on to our children. They are called acquired mutations. Cancers caused by acquired mutations are called sporadic cancers. 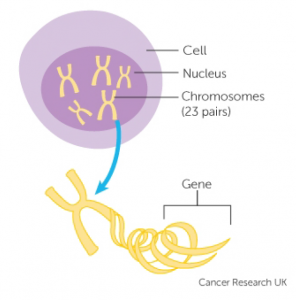 These genes would normally protect us against cancer – they correct DNA damage that naturally occurs when cells divide. Inheriting a faulty copy of one of these genes means that it cannot repair damaged DNA in cells. This means the cells may become cancerous. We inherit genes from both our parents. If a parent has a gene fault then each child has a 1 in 2 chance (50%) of inheriting it. So some children will have the faulty gene and an increased risk of developing cancer and some children won’t.

Being born with one inherited faulty gene doesn’t mean that a person will definitely get cancer. But they have a higher risk of developing particular types of cancer than other people. They are also more likely to develop cancer at a younger age. Doctors call this having a genetic predisposition to cancer. For a cancer to develop, further gene changes (mutations) need to happen. This usually happens over many years.

How common are cancers caused by inherited faulty genes?

Cancers due to inherited faulty genes are much less common than cancers due to gene changes caused by aging or other factors. Most cancers develop because of a combination of chance and our environment, not because we have inherited a specific cancer gene.

Genetics specialists estimate that only about 2 or 3 in every 100 cancers diagnosed (2 to 3%) are linked to an inherited gene fault.

A family history of cancer

In families with an inherited faulty gene there may be a pattern of specific types of cancer running in the family. Most people who have relatives with cancer will not have inherited a faulty gene. Cancer mostly occurs in older people. It is a common disease. 1 in 2 people in the UK (50%) will get cancer at some point in their lives. So, most families will include at least one person who has had cancer. Having a couple of relatives diagnosed with cancer over the age of 60 doesn’t mean there is a cancer gene running in the family.

The strength of your family history depends on:

Who in your family has had cancer

How old they were at diagnosis

You may have a strong family history if any of the following situations apply to you:

It is important to remember that cancer is most common in people over the age of 60 and is rarer in young people. So cancer in older people is less likely to be due to an inherited cancer gene.

What if I have a strong family history?

Talk to your GP if you think that you may have a strong family history of cancer. Your GP will ask you about your family and how many members have been diagnosed with cancer. If they think that you might be at increased risk they can refer you to a genetics clinic.

What if I have a known gene fault?

If you have a known gene fault, your doctor or a genetic counsellor will be able to give you an idea of how much your risk is increased compared to the general population. They may also suggest that you need regular monitoring for particular cancers or they may suggest treatment to try to reduce the risk of developing cancer.

Faulty genes and other factors

Some inherited cancer genes are more likely to cause cancer than others. It depends on how big a part the gene plays in the development of that cancer. As well as a gene fault, many other factors need to be in place for a cancer to develop. Because the other factors are not always in place, the cancer may seem to skip a generation. A parent may have the gene and not develop cancer but their child who inherits the same gene does develop cancer.

We need more research to find out what these other factors are for each type of cancer. We also need to find out more about how genes work together to cause cancer so that we can reduce the risk of developing it.